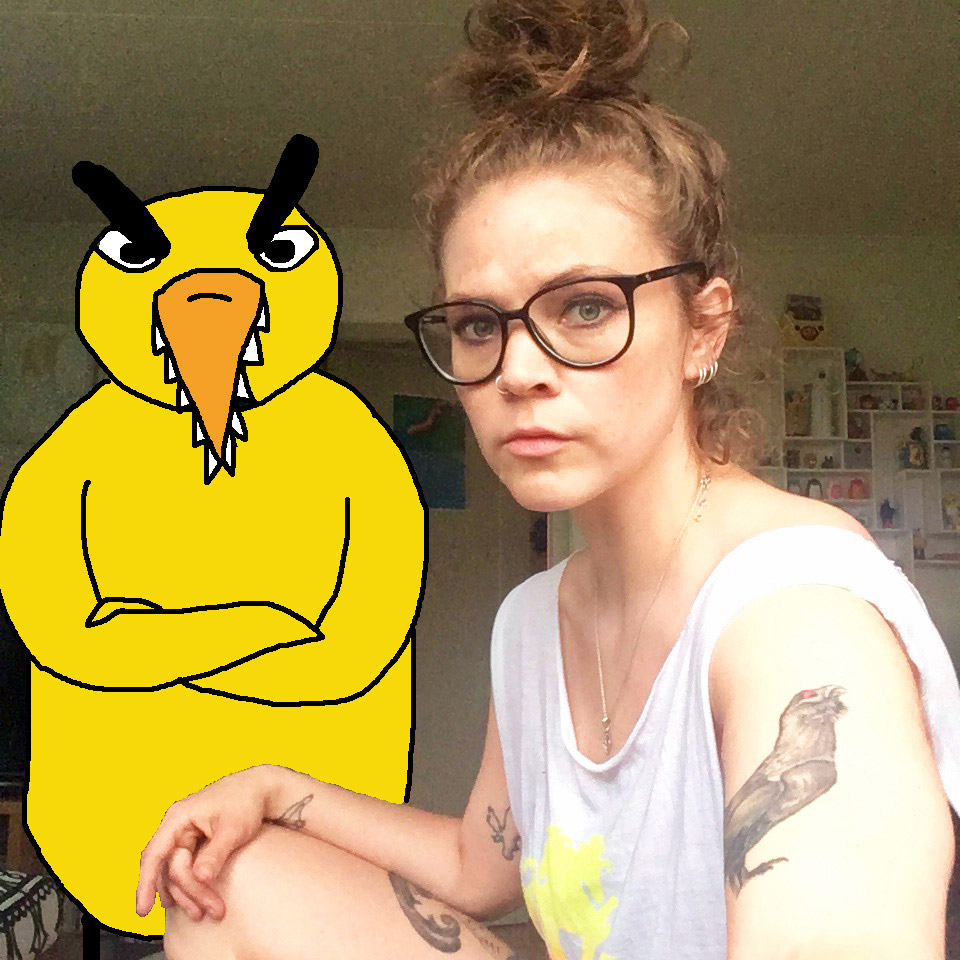 My name is Karen Anna and I am a Norwegian illustrator and artist who is currently based in Norway but who knows how long that will last eh. I have a bachelor degree in illustration/visual arts from Norwegian Creative School (NKF) and Deakin University, Melbourne, AUS. I also studied graphic design at ECA (University of Edinburgh) and lived in Edinburgh, Scotland for a whole nine years. And finally, I have a one semester, online course in Creative Webdesign from University College of Bergen, Norway, which I only took to learn to create this website from skratch. Man, was that worth it.

Oh and it’s Karen Anna by the way, or KA for short. Call me Karen and we will never be friends.

I, like Angry Duck, hate being told what to do and to follow rules I doesn’t agree with. Which is why this website is unlike your average user friendly and chic minimalistic website, and filled with random pages and other fun thangs. Sorry! My teacher at Creative Webdesign hated me intensely, because of all the nonsense I came up with, because I refused to create something that looked the same to what everyone else created. And possibly because of the creation of “fleskesiden”, a nude/beige-coloured website that only showed close ups of different types of lard, blobber, fat and other gross things. This website is sadly removed from the world wide webs :’((( #bringbackfleskesiden

I passed my course though (just) and continued my slight anarchy with Angry Duck and his world. Angry Duck refuses to accept bad behaviour of any sort, and will not look the other way when injustice takes place. He speaks up! The style of Angry Duck is also not like your average cute Disney big-eyed clones, it is very much its own thing and that is what makes it so special and different, amongst other things. It is this originality and ability to stand out from the crowd that makes Angry Duck so individual, and appeal to so many people around the world.

Angry Duck was born in Scotland in 2005, around Easter time. I was working with phone support and really got to learn how rude and unpleasant people can be when they are on the phone to you, and not face to face. It reaches another level. Since all calls were monitored and I didn’t want to lose my job, I started drawing Angry Ducks for myself and my coworkers, in Microsoft Paint, as a way to let out frustration over all the rude people who called every day.

Arga Ankan means Angry Duck in Swedish, and Angry Duck is male. He loves to wear various shoes and he couldn’t care less what people think of him, even if he is wearing pink pumps. Angry Duck thinks that people should do whatever makes them happy as long as they’re not harming anyone, and stop being such dicks to each other. Especially to animals and kids who are the most defenseless and innocent creatures there is. Angry Duck, like me, can‘t stand injustice of any kind. He will ridicule or get even with only those who deserve it. He will say and do the things you wish you were brave enough to say and do, but are too afraid to, because maybe it will get you fired. He will stick up for the weaker ones in society too, sometimes anyway. There are no real rules here, youlou. (This is how a posh person says yolo).

I continued to collect inspiration from the public and from the various retail jobs I had whilst studying in Norway, Australia and Scotland. In Scotland I also worked as a creative at an advertising agency, as a packaging designer and also in a sunbed shop, which is where inspiration for many of the characters came from. Word. I am building an empire so slowly that it is going backwards almost, but just almost.

In 2014, I was accepted into the Pictoplasma Academy in Berlin; an intense course in character design where designers from over 20 different countries were taught about sculpting, casting, character development, storytelling and concept by some of the top artists in the industry. I have exhibited Angry Duck sculptures of various sizes in Berlin and Edinburgh.

Angry Duck and I are occasionally seen at various conventions around the world, usually at DesignerCon in California, because Angry Duck likes it there. Sometimes also at London Comic Con. The best way of keeping up with these appearances is Zuckerbergian places like Facebook and Instagram. You can also use Angry Duck gifs from GIPHY and there are also three imessage sticker apps called “Angry Duck Stickers” on the ios App Store. One of them is completely FREE.

Angry Duck (and me) are hoping to make people think about the way they behave in everyday situations, and for everyone to consider other people a bit more, not just themselves. If only.

Clients include: my's mum, my dad and my sister. The rest of the family isn't having it.